Frenzy is the four-armed alien criminal from the 2009 Space Police theme.

Frenzy is to be considered a space fink for him being tough, strong, and always hungry. He is known to oftentimes eat anything in his way from asteroids to satellites, just as long as he can get his toothy green jaws around it. As he has new pieces for his body, he is known to be a major significant advancement from the 2005 version of General Grievous as they both have had four arms. However, this has been changed due to the 2010 version of General Grievous.

In a LEGO.com video titled The Chase, a character very similar to Frenzy is seen at an ice cream stand serving a customer and suddenly gets hit by the Officer's ship. In another LEGO.com video titled Ice Cream Stand he is seen to sell ice cream again, while two officers investigate. One keeps an eye on him, while the other sneaks to the back of the stand, where a gold safe is found. He flees once he sees it with his hyper hopper, vowing to never be caught. The next instant he hits his head on an awaiting SP XXL Freighter, which was called for backup. He was then seen being carried away, and the gold was taken by the freighter. He is said to be kept in ice for a long time. 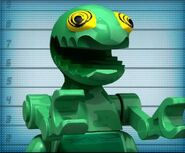