The Fright Knights were a faction of soldiers that were not ruled by a king, but instead by Basil the Bat Lord. The Fright Knights sets delved deeper into the supernatural "Fantasy" aspect of LEGO, featuring black dragons with fire-coloured wings, as on Draco the dragon and creepy trap-filled red-and-black castles, crystal balls, and Willa the Witch, a dark sorceress who was the real power behind Basil's throne. This theme could be classified as a sequel to Dragon Masters. Their headquarters was the Night Lord's Castle. It lasted from 1997 to 1998. In the US catalogues and magazines they were portrayed as villains with Basil and Willa on the same side. In Europe however, Basil and Willa were portrayed as enemies opposing each other with Basil's side being the good guys and Willa's being the villains. They also had a small part of LEGO Universe, their uniform being an outfit on the game called "Bat Lord".

In 1997, LEGO delved even deeper into the realm of supernatural fantasy with the introduction of the Fright Knights line. A giant bat emblem was the crest for Basil the Bat Lord and his forces of fright. New elements for this theme included bats, chains, crystal balls, and Basil's winged helmet. Basil rode Draco, a black dragon steed with fire-coloured wings, while his wicked partner Willa the Witch flew on a broomstick borrowed from the Fabuland line. Together, they subjected LEGO Castle to a reign of terror. All of the 1997 Fright Knight Sets have stock numbers that end with the number 7, which is often considered to be a magical number. The bat on the shields of this theme resemble bats used in Spanish coats of arms. Some of the pieces in the theme can be found in other sets, such as the helmets that the knights and soldiers used were Dragon Masters theme helmets and the wings on the Batwing Flyer were also found in the Dragon Masters theme. They made an appearance in Lego Universe, where they were an outfit on the game.

They can be seen on this image: 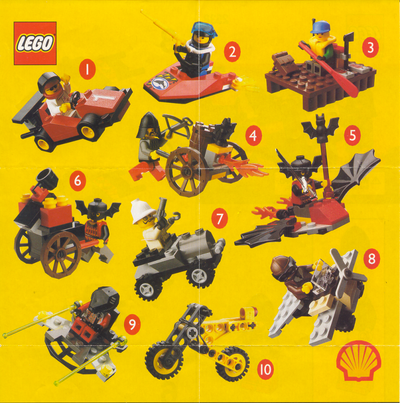