Brickipedia
Register
Don't have an account?
Sign In
Advertisement
in: Class 4 articles, Legends of Chima minifigures, Minifigures introduced in 2013
English

Furty, short for Furtivo[1], is a Legends of Chima minifigure released in 2013. He is a nomadic fox distantly related to the wolves.[1]

Furty is a nomad, an animal in the Kingdom of Chima who is not a member of any of the other tribes. Unlike his cousins, the Wolves, he is solitary, but selfish, and cunning just like a Fox.[1] In Foxtrot he spreads rumors around the Speedor race in order to cause discourse among the tribes, so Crooler and Worriz could steal chi from the Lion Temple during the race. In Crocodile Tears he impersonates ShadoWind in order to get payed by the Ravens. He also appeared in a brief moment in The Crescent, frozen in Sir Fangar's castle along with many others in his collection of frozen tribespeople (Outland Tribes, Original Tribes, Nomadic) It is unknown what his fate is after he is unfrozen, as he isn't seen after his appearance in Fangar's frozen collection. 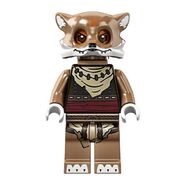 Furty on his Speedor 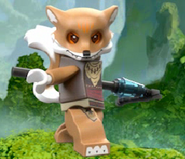 Furty in Legends of Chima: The Animated Series