The model originated in a competition in the United States where entrants could write an essay describing who this character is. The winning essay was accepted as canon. The name given to this character was Gaardus.

In the BIONICLE storyline, Gaardus has the ability to teleport to places where he has been before, as well as possessing advanced strength and hearing.

Gaardus started life as a Ta-Matoran living within the Matoran Universe. Over 80,000 years ago, he was taken and altered by a group of Nynrah Ghosts, who wanted to turn him into a living weapon. He eventually escaped their custody, and began hunting them down until he had eliminated them all. He stayed in the village for many years, but eventually he made it to the Red Star somehow, and returned to the Matoran Universe afterwards. After the death of Teridax, Gaardus evacuated the Matoran Universe along with most of its inhabitants. He is currently on Spherus Magna, helping Kopaka and Pohatu investigate Tren Krom and Karzahni's deaths. 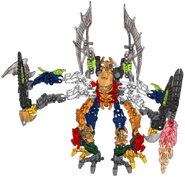