In the Harry Potter storyline she is playable on and has long blond hair, like her sister. Fleur is happy to know that her sister is rescued by Harry in the second task of the Triwizard Tournament. 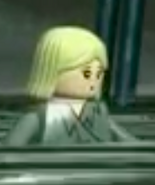