"Even the smallest person can change the course of the future."
―Galadriel in The Lord of the Rings: The Fellowship of the Ring

Galadriel wears a white dress with an Elven brooch that is shown in the front of the torso and details of the sparkling cape that's supposed to cover the dress almost. Her minifigure includes Vitruvius' cape in white and a pearl gold variant of Elrond's hairpiece. She has a calm face with cheekbones to give the face deatails, brown eyebrows and a dimple below the lips. The altered facial expression sports an angry look with white eyes and a screaming mouth. Galadriel wields a clear gem in her hand that represents the light of Ëarendil. This variant in the video game features the outfit with legs, a white cape and the hairpiece in yellow.

Galadriel was an elf who was a member of the White Council and the ring-bearer of Nenya, one of the three elven rings. Her husband was Celeborn. After the one ring was destroyed she went on the last voyage to the Grey Heavens. 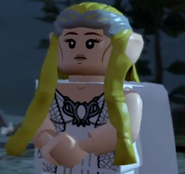 Galadriel in Lego The Hobbit
Add a photo to this gallery