The Galaxy Patrol is a Collectable Minifigure released in 2012, as one of the sixteen minifigures from 8831 Minifigures Series 7 in April 2012. He also appeared in LEGO Minifigures Online.

The Galaxy Patrol wears an Earth Blue suit, and a helmet and a new armour piece. Instead of a visor piece for his helmet, he has double sided printing on his head to simulate an orange visor with an aiming crosshair. While on the other side of the head, he has a mechanized eyepiece. 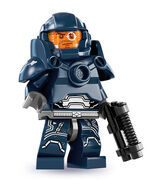 The Galaxy Patrol without his armour, with his alternate expression

The Galaxy Patrol's parts
Add a photo to this gallery

Retrieved from "https://brickipedia.fandom.com/wiki/Galaxy_Patrol?oldid=1977614"
Community content is available under CC-BY-SA unless otherwise noted.