Galidor was a theme introduced in 2002. It was based on Galidor: Defenders of the Outer Dimension, a CG-intensive, science-fiction television series broadcast on Fox Kids and later on ABC Family[1]. Production of the show was partially funded by LEGO, which produced a line of sets to go along with it, all based on a simplified action-figure structure vaguely similar to BIONICLE, which had been introduced the previous year.

Galidor - Defenders of the Outer Dimension followed the adventures of Nicholas Bluetooth and his friend Allegra Zane, two teenagers who find themselves warped to Galidor, a world in the Outer Dimension which is being threatened by the evil Gorm. Nick and Allegra were brought there by the robot Jens, who sent a transdimensional pod to Earth to retrieve the prince of Galidor, hidden away from Gorm until he would be old enough to fight him. Once on Galidor, Nick discovers that he has the power to "glinch" - alter his limbs to copy those of anybody he meets, gaining any special abilities they have in the process, such as extendable claws or a powerful jump.

Nicholas Bluetooth, an American teenager, is suffering from peculiar dreams, in which he sees fantastical creatures on an alien landscape, and a strange man.
One night, he is awoken from a dream, and discovers a strange object floating by his bed. It is a large metal ring, which creates a 3D projection of a map. Nicholas's friend, Allegra Zane, deciphers the map. It leads them to a sewer chamber, where they find a mysterious large vehicle. Nick goes in to investigate, Allegra following, and the craft takes off.
It lands in the strange landscape from Nick's dream, where they encounter a robot, Jens. Jens tells them that he sent the craft to find a great warrior, and accuses Nick of stealing it. While he repairs the ship, which suffered some damage upon landing, Nick and Allegra sleep. Nick dreams of a mysterious woman, who tells him to "follow his heart" to "defeat Gorm". He is then awakened by Allegra; a mysterious storm is blowing towards them. Jens states the the storm is actually Gorm. A giant projection of Gorm's head tries to capture Allegra, but she is saved by Nick, who somehow switches arms with Jens, allowing him to reach out and pull her inside the vehicle. Jens tells Nick that he has "glinched": Switched limbs with another entity. This means that Nick is the warrior Jens sought. They then proceed to fly off in the craft, to find Euripides, the former arch-philosopher of the royal court of Galidor; only he can lead them to Galidor.
While in-flight, Allegra tries to find out how to control the vehicle, to use it to return home. However, she almost kills Nick by opening an airlock, and crash-lands them. Fortunately, they had already reached their destination. The group leaves the vehicle, and Jens wonders where Euripides is. He determines that he must have gone to the top of a large rock formation, so the group sets off that way. While Allegra and Jens climb the formation, Nick is forced to return to the vehicle (which he dubs "The Egg"), to recover the Map. He is then accosted and dragged underground by an Aquart.

It was the "glinching" limb-switching ability that formed the core mechanic of the Galidor sets. Each set contained an action figure composed of about a dozen parts, connected by standard pins, typically at the neck, shoulders, elbows, hips and knees. Despite being one of the poorest-performing lines ever produced by LEGO, this concept would later be adapted for reuse with the Ben 10 license, which also performed poorly.

Galidor began development by 1999[2] initially under the name LEGO Beings with the goal to show what LEGO would be like without the brick.[3] The final story concept was not in place at this point, but several concepts were being explored including a short film[4] and video games.[5][6][7] Eventually, the concept made it to Studio 12, a concept development studio of the LEGO Group's, where the idea further evolved and switched to the internal name of LEGO Genesis.[8]

An arm with an early joint concept made in SolidWorks

Early sketches for the main characters of Galidor

Early art for the main characters of Galidor 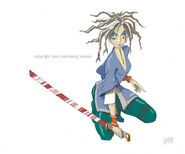