Gamling is a minifigure from the theme The Lord of The Rings introduced in 2012 with LEGO The Lord of the Rings: The Video Game.

Gamling was from Rohan and he understood the language of Dunland. He was a member of the guards of Meduseld. By the time of the War of the Ring, he was an old man of some 63 years. He fought at the Battle of Helm's Deep and aided Éomer, Gimli, and Grimbold while they defended the gates of the Glittering Caves. Gamling rode to Dunharrow afterwards with King Théoden and supervised the horsemen of Rohan. Gamling carried the banner of Rohan, as the Rohirrim rode to the Battle of the Pelennor Fields. He was shocked and grieved to find both Théoden and Éowyn dead, though Eowyn was only poisoned by the Black Breath of the Witch-king. He was among the men that went back to Rohan to bury Théoden, while the main host of the west marched to the Black Gate. 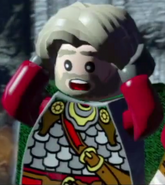