She has wavy hair in black with purple highlights and bright green skin with silver facial details and a duel expression:happy and angry. Gamora has a red torso with brown hands printed with some of her chest showing, and various lines showing the detail of her outfit.

Raised by Thanos to be a living weapon, Gamora seeks redemption as a member of the Guardians of the Galaxy, putting her extraordinary fighting abilities to good use. Gamora is a trained warrior assassin, whose life under her adoptive father Thanos’ torturous wrath leads her to turn against him. Realizing the universe is threatened by powerful Infinity Stones, she takes up the mantle of Guardian of the Galaxy.

Gamora is a former Zehoberei assassin and a former member of the Guardians of the Galaxy. She became the adopted daughter of Thanos and adopted sister of Nebula after he killed half of her race. She served him for years before betraying him in an attempt to free herself from his ways. She was hired to steal the Orb, and became caught up in the Quest for the Orb, becoming friends with the other members of the Guardians of the Galaxy. After the Battle of Xandar, she left to work with them all. Having made a deal with the Sovereign to kill the Abilisk, Gamora was able to take back custody of Nebula with the intention of finally bringing her to justice in Xandar.

The mission to punish Nebula was delayed however when Gamora and the Guardians came into contact with Ego, the long lost father of Star-Lord. While Ego claimed to just want to bond with his son, Gamora was suspicious and, alongside Nebula who had freed herself, discovered Ego's evil intentions to destroy and rebuild the universe. Upon this discovery, the Guardians teamed up to destroy the living planet, succeeding with the help from Mantis, who joined the group, but at the cost of Yondu Udonta sacrificing his life. After Udonta's death, Gamora finally confessed that she had romantic feelings to Star-Lord and started a relationship with him.

Years later, Gamora and the Guardians intercepted a distress call sent by Asgardians, Thor warned them that Thanos had begun searching for the Infinity Stones himself. Realizing what he intended to do with them, Gamora led her friends to Knowhere to procure the Aether, only for both it and Gamora to be captured by Thanos himself. Thanos took Gamora to Vormir, where he sacrificed her against her will in order to obtain the Soul Stone, a process that trapped Gamora's soul inside the Soulworld.

In 2023, the Time Heist orchestrated by the Avengers with the intention of undoing the Snap inadvertently enabled the 2014 versions of Gamora and Thanos to learn how the future would unfold, causing a major divergence from the established timeline. Acting upon the obtained intelligence, Thanos successfully brought his armies from 2014 to the future where Gamora eventually turned against him after learning her tragic future before helping the Avengers and their allies to defeat him once and for all. After surviving the battle, she mysteriously disappeared with Quill and the other Guardians searching for her. 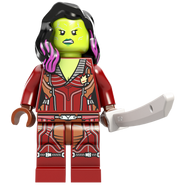 Gamora in LEGO Marvel Super Heroes 2
Français
Community content is available under CC-BY-SA unless otherwise noted.
... more about "Gamora"
RDF feed
Accessories
Sword +
Appearances
76021 The Milano Spaceship Rescue
LEGO Marvel Super Heroes
LEGO Marvel Super Heroes 2 +
ArticleRating
3 +
Image
'"`UNIQ--tabber-00000001-QINU`"' +
Img1
Gamora GOTG.png +  and Gamora.png +
Img2
GamoraVol2.PNG +  and GamoraMarvel2.PNG +
Img3
Gamora2018.PNG +
Img4
What If…? Gamora.jpeg +
InfoboxTemplate
Minifigure +
ShopDescription
Gamora
The last surviving memb … Gamora<br />The last surviving member of the peaceful Zehoberi species, Gamora was transformed into an unparalleled warrior through rigorous training and physiological augmentation. For years Gamora has used her formidable fighting skills and master swordsmanship in service to a dark power, earning her the reputation of the “most dangerous woman in the universe.” Gamora now seeks to redeem her past crimes as a member of the Guardians of the Galaxy, and waits for an opportunity to bring vengeance to those who have manipulated her.ngeance to those who have manipulated her. +
Theme
Super Heroes +
Title
Gamora +
Txt1
Ravager +  and Comics +
Txt2
Grey Top +
Txt3
Avengers: Infinity War +
Txt4
What If...? +
Variations
Ravager