Gamorrean Guards are Classic Star Wars minifigures first released in 2003. They were redesigned in 2012 and again in 2022.

The original variation of the Gamorrean Guard has sand green legs, a sand green torso, and a sand green headpiece that extends down to cover the body.

The latest variation of the Gammorean Guard has a much more detailed body compared to its predecessor. The body piece now has printing on it and uses a much more detialed design to show its facial expression, which is similar to a pig with horns. The arms are olive green and the hands too. The legs have printing on it to show the lower part of its clothes.

Gamorreans served as bodyguards within Jabba's Palace. They were extremely unintelligent, but strong. They were equipped with vibro-axes. 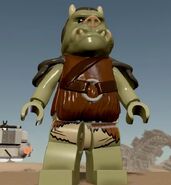 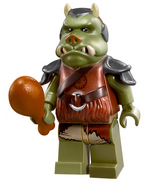 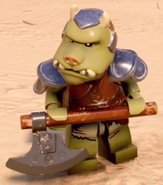