Brickipedia
Register
Don't have an account?
Sign In
Advertisement
in: Class 2 articles, Minifigures introduced in 2007, Castle (2007),
and 5 more

"By our master’s command, the Castle and the kingdom will be ours. None shall stop us!"
―Black Knight Skeleton

General Bone,[1] also known as the Black Knight Skeleton,[2], the Black Skeleton,[2] or Skeleknight,[3] is a Castle minifigure introduced in 2007.

General Bone's legs are black with a dark red hip. His body is black with white hands and a white Skeleton Warrior head. He wears black armour that consists of a breastplate with skull markings, which is shared with the Dark Mage and Double Axe Orc, and a helmet reused from the Shadow Knights.

General Bone is the leader of the Evil Wizard's Skeleton Legion. He is often seen riding a black skeletal horse, such as when he partakes in the Final Joust against the Lead General.

In LEGO Quest & Collect, General Bone is a physical defender with the skills "Chilling to the Bone", "Raging Tornado", and "Mind-Control Removal". His profile reveals that he secretly adds frilly decorations to his lance as a hobby.

The Black Knight Skeleton as seen in the instructions 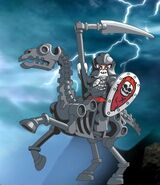 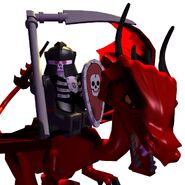 The Wizard's Dragon in LEGO Battles 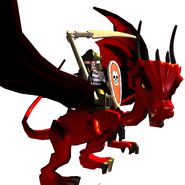 Alternate render of the Wizard's Dragon

Concept render of the Skeleknight

"By our … The Black Knight Skeleton</br></br>"By our master’s command, the Castle and the kingdom will be ours. None shall stop us!"</br></br>Clad in enchanted black armor, the Black Knight Skeleton leads the Evil Wizard’s dark army across the kingdom. Stronger and more cunning than the other Evil Skeletons, he is a master of fighting and lacks any honor in battle. Forever loyal to his master, he will do anything to capture or destroy the Castle!anything to capture or destroy the Castle! +  and NAME: General Bone