"Welcome to the future!"
―General Cryptor in "The Art of the Silent Fist"

General Cryptor is a minifigure from the Ninjago theme released in 2014 part of the Rebooted wave. He is second in command to the Overlord. He is the tertiary antagonist of season 3.

General Cryptor is the lethal general of the Nindroid Army. He is far more advanced than the other Nindroids in combat, emotions, and smarts, and is well prepared for battle, having armor and two katanas on him at all times. Like all other Nindroids, he is also capable of cloaking, although he can also shoot lasers out of his armor, which are stronger than the ones fired out of regular Nindroid's eyes.

He first appeared in "The Art of the Silent Fist", after being created by P.I.X.A.L.. He then lead the Nindroid's first attack on the ninja. After the Ninja attempted to escape in their hacked vehicles, General Cryptor used his Destructoid, and single handedley destroyed the NinjaCopter, the Kai Fighter, the Thunder Raider, and Cole's Mech. Unfortunately for Cryptor, the Ninja put the vehicles on autopilot, and Cryptor had to report to an outraged Overlord, who called him and his army a failure.

Cryptor is next seen guarding the tower where the power source was. He quickly found the Ninja after Min-Droid gave them away, and also assaulted P.I.X.A.L. when she tried to help. Zane left the ninja to help P.I.X.A.L, and plows through the Nindroids, then sees Cryptor holding up P.I.X.A.L.. He catches Zane's Techno Blade, calls him a "tin can with feelings", and throws Zane, disposing of his Techno Blade. Zane attacks Cryptor, knocking away his katanas, but Cryptor makes a comeback, then cloaks himself and pummels Zane. However, before he could finish him, the power is destroyed by Kai, Cole, and Jay, which powers down all machines in New Ninjago City, including Cryptor and P.I.X.A.L..

Later in "Blackout", he was brought back by Pythor P. Chumsworth by Electric Eels. He battled Zane and P.I.X.A.L., along with the others, while he remarked that Zane "needed a little girl to help him fight."

In "The Curse of the Golden Master" Cryptor and other Electro Cobrai powered Nindroids went to Serpentines' underground tomb to destroy ninjas. He kicks Skales Jr. and laughs to him but Kai kicks him saying that he is about to be history. Then all ninjas attack him but he just punches them. He throws Cole to Zane, Kai and Jay. After that more Nindroids come and then ninjas find out Electrocobrai are powering them so he leaves the place.

In "Enter the Digiverse" he leads Nindroids to the Borg Tower driving on Destructoid. After Borg puts up iron walls around the building to stop them of going inside, he uses saws from his vehicle to destroy them.

In "Codename: Arcturus" he asks Pythor about the Overlord's whereabout, as he suspects Pythor may be tricking the Nindroids into believing the Overlord is still alive, just to manipulate them.

Cryptor captains the Arcturus in "The Void". When the Nindroids find out that the Ninjas have entered Arcturus, he sends Min-Droid and other Nindroids to get rid of them. Later, when the Nindroids find the Golden Weapons, Cryptor warns them to not touch them directly, and a Nindroid who does so gets disintegrated. Cryptor leads a convoy carrying the Golden Weapons, but the ninjas pursue them and steal Cryptor's ignition key for the Arcturus, so that they cannot leave the comet with the Golden Weapons and take them to the Overlord. However, alien bugs eat the Arcturus and upon seeing this, Cryptor and the other surviving Nindroids use their built-in boosters to fly off the comet with their golden prize.

In "The Titanium Ninja" Cryptor faces Nya, who tricks him into repeating his low opinion about Min-Droid with the little nindroid nearby. Min-Droid fights Cryptor and both are destroyed in mid-fight when Zane freezes New Ninjago City in his fight against the Overlord and both Nindroids shatter.

General Cryptor is one of the villains revived by Sensei Yang during Day of the Departed. He faces Zane and claims to know his every move, but is defeated anyways when Zane simply stops fighting and Cryptor crashes against a tree branch due to the impulse of his own attack.

Without hood and armour

Featured on a poster, the binary code translating into "NINDROID"

Appearing in a reflection on Zane's eye

In Ninjago: Masters of Spinjitzu 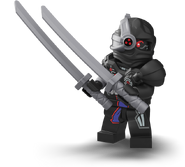 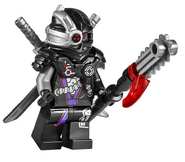 Français
Community content is available under CC-BY-SA unless otherwise noted.
... more about "General Cryptor"
RDF feed
Accessories
Katana (X2)
Techno-Blade (stolen from Kai)
Bazooka
Saw
Saw Staff +
Appearances
70721 Kai Fighter
70725 Nindroid MechDragon
70726 Destructoid +
ArticleRating
3 +
Image
General Cryptor-0.png +
InfoboxTemplate
Minifigure +
ShopDescription
General Cryptor is the robotic leader of t … General Cryptor is the robotic leader of the Nindroid army, and a servant of the Digital Overlord.<br />Unlike the Nindroids, who rarely speak, Cryptor talks all the time.<br />He loves to taunt and insult his foes in battle, and has even been known to criticize his own troops (saying they are as stealthy as a herd of hungry yaks).<br />Cryptor’s emotional programming is also more advanced than that of the Nindroids, and his quick temper can be used against him.<br />Cryptor dismisses the ninja as a serious threat to his army.<br />That may be a mistake that comes back to haunt both him and the Digital Overlord.o haunt both him and the Digital Overlord. +
Theme
Ninjago +
Title
General Cryptor +
Years
2014 +
Advertisement