General Kozu is a Ninjago minifigure that appears in 70504 Garmatron. He is one of the secondary antagonists of Season 2.

Differing from the standard Stone Warrior design, General Kozu is bright red with white markings and has four arms much like Lord Garmadon does, due to a unique "torso extension piece" that also makes him very tall compared to a normal minifigure.

He wears a red samurai helmet with a black piece reminiscent of scorpion claws connected to a clip on the front and a red visor-like piece of armouring cover the lower part of his face. This piece has black and red tooth markings.

Kozu's face is white with red and black lines swirling on it, with a heavier concentration of black and red around his green eyes. His head is connected to a torso extension piece that gives him his extra pair of arms and is exclusive only to him. It is of elaborately designed armour that covers his upper body and shoulders and is bright red with white outlining.

Below this "upper torso" is the standard minifigure torso mould. This, too, has the red and white colour scheme and is more intricately designed then his upper torso armour. It has printing of the same type of armour that covers his torso extension. All four of the general's arms are bright red with black hands.

General Kozu, like the rest of the Stone Army created by the Overlord, was brought to life by the Great Devourer's venom and was accidentally unleashed by the Serpentine. He made his first prominent appearance in "The Island of Darkness", where he served as Lord Garmadon's second in command and a translator for the rest of the stone army, who spoke an unintelligible language of their own. Kozu's voice was guttural and deep and he generally spoke slowly.

Kozu was in charge of mining for the Dark Matter that would be used to create Garmadon's new ultimate weapon. When the ninja were discovered on the island, Kozu and the stone army gave chase in several of their vehicles, following them to the Temple Of Light where, upon seeing his warriors defeated by the newly charged-up ninja, he began to have misgivings. But it wasn't until he came face to face with The Green Ninja that he gave the order to retreat, fleeing the battle he had no hope of winning.

After the perturbing defeat of his stone army, Garmadon ordered Kozu to step up defense. That he did, building more vehicles and adding deadly attachments to the old ones. Garmadon was very pleased with the results Kozu showed him. But after a rebuttal by the Overlord, who questioned Garmadon's resolve as the final battle with his son drew nearer, the latter shouted at his general and minions to drop what they were doing to work on his ultimate weapon.

Not long after this, a "prisoner" was brought into Garmadon's camp, bound in rope and held "captive" by the four ninja disguised as stone warriors. Kozu did not see through their disguises and approached them, giving them orders in the gutteral language of the stone army. The ninja, unable to understand the ancient language, began making sounds they thought were similar to the language. Kozu stared at them, unable to grasp why this unintelligible babbling was being spouted from his warriors. The prisoner, Misako, then walked up to Kozu and told him they would get no information from her unless he brought her to Garmadon. Kozu grabbed her by the arm and dragged her to the hut where Garmadon was resting. Apologizing for interrupting him, Kozu stated he had a prisoner who knew the whereabouts of the ninjas' base. When Misako was brought in, Garmadon, upon seeing his wife for the first time in many years, lost his composure for a moment and then told Kozu to release her. Kozu sliced through Misako's ropes with a single slash of his sword and then departed the scene.

Upon observing four warriors that were not working, Kozu marched up to them and shouted at them in the ancient language to get to work. They were the four "warriors" who had brought Misako into the camp. The "warriors", however, were discovered as being ninja after knocking a stone scout off of a stairway. The ninja and Misako, who had managed to steal Garmadon's helmet in order to stop the countdown to the final battle, escaped in a Power Drill a with a friend's help. Kozu and his warriors gave chase, but were not fast enough and soon fell back. When they caught up to the ninja, Lloyd and his father were facing off. Upon seeing the stone army, however, Lloyd jumped in the power drill and the six of them sped off.

Kozu, however, had no intentions of losing his quarry yet again. He silently came up behind the ninja as they were at the clock of the final battle, trying to find the helmet's perch. Once the helmet was put on it's perch, the clock would stop. Kozu came up behind Sensei Wu just as he was about to catch the helmet, tossed to him by Jay. Kozu intercepted and caught the helmet gloating that there were only 30 seconds left until the final battle, according to the clock. But one of the clock's rotating parts knocked the helmet from his hand. The helmet flew up into the maze of cogs and gears, where a stone swordsman and Cole jumped up to snatch it. Before the General's eyes, Cole grabbed the helmet, lost his balance, and then dropped it. The helmet bounced off of the spinning gears several times before landing right next to it's perch. With only seconds to go, Misako rushed to put the helmet on it's perch and succeeded - just as the clock hit zero. The clock stopped, but it was too late. Kozu laughed and his warriors stepped forward, pushing the ninja to the edge of the cliff. The rock gave way under their feet and all but Nya, who Kozu had grabbed, began to fall. Jay, just before falling, yelled to Kozu to let Nya go. Kozu responded, "Or what? You'll make a big splash?" He laughed as the ninja, Wu and Misako fell to the water below. He then turned away from the cliff face and proceeded to take Nya to Garmadon.

When Lord Garmadon was ready to fire Garmatron at Ninjago, General Kozu tried to load the ammo into the weapon. Sensei hits Kozu into the ammo, and he was accidentally shot out of the cannon, landing in "Grand Sensei Dareth's Mojo Dojo". Dareth told his students to attack Kozu, and they all pile on top of him.

In the next episode, when the stone army arrived in Ninjago City, Kozu reunites with them. When Dareth takes control of the stone army, Kozu was under his command, just like the other stone warriors. Dareth commands the Stone Army to fight the Overlord, but Evil Nya shoots him and his army, making him fall off the stairs. It is unknown whether he survives the attack or the fall, but he is destroyed when Garmadon is defeated.

Kozu is one of the villains revived by Sensei Yang during Day of the Departed. When each villain chooses a ninja as an opponent, Kozu chooses Dareth and attacks him with a group of stone warriors, but Dareth manages to reach the helmet to control again the stone army and turns them against Kozu. 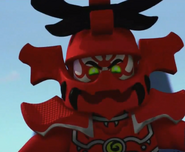 Kozu while chasing the ninja 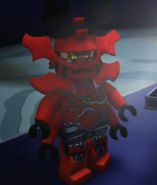