Brickipedia
Register
Don't have an account?
Sign In
Advertisement
in: Articles in need of expansion, The LEGO Ninjago Movie minifigures, Ninjago Minifigures, Minifigures introduced in 2017
English

General Olivia also known as General No. 1 is a Ninjago minifigure who appeared in The LEGO Ninjago Movie.

After the previous General No. 1 got fired, she became General No.1. However, due to her lack of progress in finding Sensei Wu, the ninjas and Koko, Garmadon fires her as well. Later, when all the fired generals and soldiers find Garmadon and the ninjas, she had become their leader. 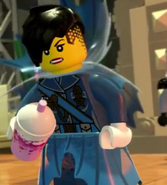