Brickipedia
Register
Don't have an account?
Sign In
Advertisement
in: Class 4 articles, Minifigures introduced in 2012, Minifigures (theme),
and 2 more
English

The Genie is a Collectable Minifigure released in 2012 as one of the sixteen minifigures from 8827 Minifigures Series 6.

The Genie has an azure torso, head, and leg piece. The leg piece is a new part, depicting a ghost-like tail with a hole for placing on a stud. The Genie's hands are gold. He has a purple turban, a gold lamp, and a jewel/feather that can be placed in the hole in the turban. 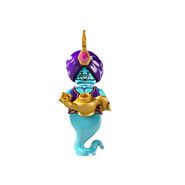 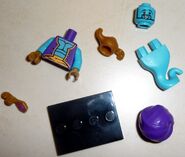 Deutsch Français
Community content is available under CC-BY-SA unless otherwise noted.
... more about "Genie"
RDF feed
Accessories
Magic Lamp
Turban (Purple) +
Appearances
8827 Minifigures Series 6 +
ArticleRating
4 +
Image
Col096.jpg +
InfoboxTemplate
Minifigure +
ShopDescription
“I’ll grant your wish…your wish for bri … “I’ll grant your wish…your wish for bricks!”</br>Rub the magic lamp and this friendly Genie will pop out to grant your wishes*…as long as they have to do with LEGO® bricks! Want a big enough pile of pieces to build a perfect full-scale model of the Great Wall of China? No problem! Looking for that long-lost LEGO Castle set you left in the playground when you were 5 and never saw again? Your wish is his command!</br></br>There’s only one limitation on the Genie’s incredible magical powers: he doesn’t do instruction booklets. He’ll give you all the bricks you could possibly want, but it’s up to you to figure out what to do with them. Ask him why, and he’ll just tell you that building steps are another genie’s department!</br></br>(*wish-granting requires use of imagination)wish-granting requires use of imagination) +
Theme
Minifigures
Series 6 +
Title
Genie +
Years
2012 +
Advertisement