Brickipedia
Register
Don't have an account?
Sign In
Advertisement
in: Class 4 articles, The LEGO Batman Movie minifigures, Minifigures introduced in 2017,
and 2 more
English

"Stand and deliver! It is I; Gentleman Ghost!"
―Jim Craddock in LEGO DC Super-Villains

Gentleman Ghost is a 2017 minifigure that first appeared in The LEGO Batman Movie.

"Gentleman Jim" Craddock may have been a thief, but when he was caught, it was for a crime he did not commit. A lawman accused Craddock of a violent crime and had him hanged; it turned out nobody had commited the crime, but the alleged "victim" arrived too late to explain the lawman that she was safe and sound. Since his death was unfair, Craddock returned several years ago as a ghost to take his revenge on Hawkman, the reincarnation of the lawman who hanged him. In the meantime, the now named Gentleman Ghost has returned to his old ways as a thief.

Unlike other Super-Villains who may dress up as phantoms, the Gentleman Ghost is a genuine specter, the spirit of the 19th-century robber and highwayman Jim Craddock. Thanks to his ghostly powers, he can walk through walls and become invisible, move instantly from one place to another, and create a spooky sensation of chilling cold. Yikes!

Bat-Fact: A tricky guy to catch, but vulnerable to the Nth metal that Hawkgirl uses in her costume and weapons. 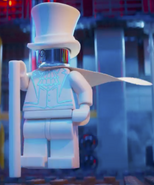