Brickipedia
Register
Don't have an account?
Sign In
Advertisement
in: Class 2 articles, Minifigures introduced in 2011, Star Wars minifigures,
and 2 more

The Geonosian zombie has grey arms, legs, hands, bodies, and heads, and his belt's colour is black. He wears a golden pendant with black markings and a red crystal. His body is meant to be thinner than it really is, due to the black 'empty space markings' used mostly for feminine torso printings at the sides. He has the same type of 'empty space markings' on the sides of his legs. There are light grey speckles on his torso and legs. His head is elongated, his eyes are half-closed and pure white, and he has light grey and black printings in other places on his head. His wings are transparent with grey markings, and they are folded double. They connect on like Jedi cloaks.

The Geonosian zombies are playable characters in the video game LEGO Star Wars III: The Clone Wars, They are the same as the Geonosian Warriors but blue instead of grey or sand colored. Their eyes have no pupils, and their wings are tattered and torn. They attack by swinging their arms like maniacs, and cannot fly. When they are attacked in the game, their head comes off, followed by their legs, and then they die.

Geonosian zombies are the same as Geonosian Warriors but have grey skin, are dead, and are controlled by worms inside their heads. The worms are placed there by the Geonosian Queen to ensue the warriors' loyalty, and they stay there even after the Geonosian dies. 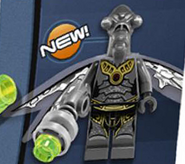