George Lucas is a minifigure that is based on the real-life movie-director George Lucas. He is seen at the ending of "Raiders of the Lost Brick" along with Steven Spielberg. He has the same hair as Mr. Ollivander. In 2853402 LEGO Star Wars: The Visual Dictionary, a picture of him may be seen, except he has the same hair piece as Gilderoy Lockhart. Many times during The Padawan Menace, Lucas has to remind Darth Vader that he is not in "that" specific scene. 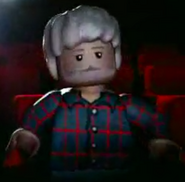 Retrieved from "https://brickipedia.fandom.com/wiki/George_Lucas?oldid=855977"
Community content is available under CC-BY-SA unless otherwise noted.