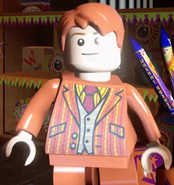 George Weasley in LEGO Dimensions
Add a photo to this gallery