A Ghast is a Micro Mob and minifigure that was released September 1, 2013, in 21106 The Nether. Ghasts are mobs in the game "Minecraft", which is what the set is based on.

The Ghast is white, with a smooth top and printed black eyes. They have tentacles hanging from their bottoms. Currently, they are the largest Micro Mob in the LEGO Minecraft theme. Their minifigure scale variant has an alternate angry face, and a stud shooter in his mouth.

Ghasts are giant hostile mobs found in the Nether dimension in Minecraft. They shoot fire balls (known as "Fire Charges") at the player (Steve) when he is about sixty blocks away from the ghast (In Minecraft) Even though they track the player from about a hundred blocks away. 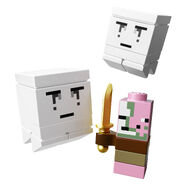 Two Ghasts with a Zombie Pigman

New Model
Add a photo to this gallery

Retrieved from "https://brickipedia.fandom.com/wiki/Ghast?oldid=1943359"
Community content is available under CC-BY-SA unless otherwise noted.