Ghekula is a BIONICLE combo model first appeared in 2002. It can be built with the pieces of 8562 Gahlok and 8564 Lehvak, the instructions were shown in the May 2002 LEGO Magazine and on LEGO.com in the "Builts" section.

The Ghekula species was created by the Makuta using Viruses and Liquid Protodermis to be one of the Rahi to inhabit the Matoran Universe.

Some Ghekula were found in the waters around Metru Nui. After the Great Cataclysm, many migrated to the newly-formed island of Mata Nui, where they established themselves in the Fau Swamp of the Le-Wahi region. At some point before the coming of the Toa Mata, the unscrupulous Po-Matoran Ahkmou organized a scheme of selling "lucky Ghekula" to superstitious Matoran. This was stopped by the Turaga.

Ghekula began to spread to the calmer waters of Ga-Wahi as the activities of the Bohrok drove them from their usual habitat. The Ghekula have since migrated back to the Matoran Universe.

Ghekula are amphibious swamp-dwelling Rahi. They are considered to be a natural enemy of the Bog Snake. Harming a Ghekula, whether intentional or accidental, is considered by Matoran to be a harbinger of bad luck. 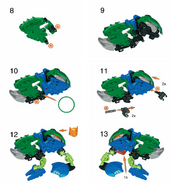 Retrieved from "https://brickipedia.fandom.com/wiki/Ghekula?oldid=1240868"
Community content is available under CC-BY-SA unless otherwise noted.