Brickipedia
Register
Don't have an account?
Sign In
Advertisement
in: Class 2 articles, Castle Minifigures, Minifigures introduced in 1990,
and 3 more
English

This article is about the Minifigure. For the set, see 75053 The Ghost.

Ghosts are spirits of dead minifigures, that appear in many dark and isolated regions, and within some castles. The Ghost minifigure was originally released in the Castle theme, and it has become something of an icon for the theme. Three of them are major characters in Monster Fighters. There have been several different variations of the ghost released over the years.

The Ghost has appeared in four different physical variations across the years, not to mention the different types of ghosts that appears in various video games. All three contained a specifically designed headgear glowing in the dark, black head, plain white torso and white arms. The first one (1990 - 1995) having white hands and 1 x 2 white tile and brick for legs. The second (1997 - 2000) having a ghost head gear and standard minifigure white legs with white hands, and the third one (2006) having yellow hands and a darker/trans glowing in the dark headgear piece.

The original ghost minifigure, and also the longest lasting, featured a glow-in-the-dark cowl with a smiling expression moulded in it, a black face, and a white torso with white arms and hands. Unlike later versions, instead of having normal legs, a white 1 x 2 brick and tile were attached to the bottom of the torso.

The second ghost minifigure is generally what is regarded as "the classic ghost". It is identical to the previous version in all ways, except for the inclusion of normal white legs instead of the bricks used by the original. In the Time Twisters theme, this ghost is used to represent Goldie.

The third version of the ghost, which was the only one seen in the first decade of the 21st century, is almost identical to it's predecessor. The only difference is that while the older ghost has white hands, this version sports yellow versions.

The fourth and most recent ghost was released in June 2012, in the Monster Fighters theme. With a black face, and white body and hands, it would appear to be most similar to the second version of the ghost, however, this is the only ghost so far to feature a radically redesigned cowl. It is more detailed, and shows a wailing expression, in contrast to the classic smiling face, as well as a molded tip for the cowl.

There is also a ghost which looks like Version Four, but it has a brick instead of legs, like the Original Ghost. This ghost could probably be Version Five.

Version Five was released in May 2020, in a creator set. This version, unlike the others features a printed minifigure head and a hood piece. They have a blank white torso and an unprinted white dress piece. It is exclusive to set 10273 Haunted House.

In The LEGO Movie, the original Ghost is among the Master Builders that meet in Cloud Cuckoo Land.

Vitruvius becomes a ghost after being killed by Lord Business in The LEGO Movie. He "floats" using a string.

A ghost appears in the game LEGO Racers as a hazard on the Dark Forest Dash track in the first and fourth circuits, floating around and spooking racers who collide with it.

Ghosts are seen in Lego Indiana Jones: The Original Adventures as the ghosts that come out of the Ark of the Covenant. They appear simply as the shroud, without a minifigure body or limbs underneath.

The ghost is a playable character in LEGO Battles. Here, it resembles its classic appearance.

There are several ghosts in LEGO Rock Band which are known as the Ghosts of Brickton Manor. There are transparent blue versions of normal minifigures without legs.

The ghosts of Lily Potter and James Potter appear in the two LEGO Harry Potter games. These ghosts resemble the Force Ghosts from Star Wars, in as that they are glowing tranlucent blue versions of normal minifigures.

The ghost of Boromir appeared in LEGO The Lord of the Rings: The Video Game.

2006 Ghost in the instruction booklet

A Monster Fighters ghost glowing in the dark

Ghost as seen in The LEGO Movie.

Ghost as seen in The LEGO Movie. 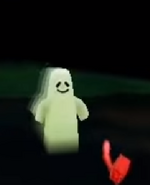 The ghost in LEGO Racers

A ghost in LEGO City Adventures.