In the comics, Ghost is a classic enemy of Iron-Man who was originally a brilliant engineer that created "GhostTech" a technology capable of turning intangible. The company he worked for manipulated Ghost constantly for their benefit and even hired a woman to pose as Ghost's girlfriend before assassinating her as she was going to reveal the truth to the genius inventor.

This death caused Ghost to spiral into madness and implant themselves with Ghost-Tech, in-doing so gaining the power to turn intangible. Ghost killed everyone responsible for manipulating them but came into odds with Iron-Man who defeated the inventor. Following this Ghost came to fight Iron-Man on countless occasions, being one of the few Iron-Man Villains to upgrade and advance their technology after each fight with the hero to better combat Stark's tech and strategies.

Ava Starr is the biological daughter of Dr. Elihas Starr who lost his job thanks to Henry Pym, resulting in an incident which killed her parents and left her with the quantum superpower to phase through solid matter.

Ava became the surrogate daughter of Bill Foster and a professional corporate saboteur who goes under the nickname "Ghost". 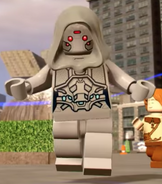