A Ghost is a Monster Fighters minifigure released in 2012. The ghosts are similar to the previous Ghosts, but have a redesigned shroud.

The Ghost's torso, along with its legs, are both completely white. The Ghost's arms are also completely white, as are the hands. The Ghost's head is completely black. The Ghost's shroud looks like a white blanket draped over the minifigure, molded with wrinkled lines and crease marks. The top of the shroud has holes that resemble eyes and a wailing expression, revealing the black face.

In 30201 Ghost Polybag, the included ghost has no legs, but a white brick in their place. It also has a ball and chain attached to the bottom of the brick. In 10228 Haunted House, the same style is used, but does not include the ball and chain.

Ghosts inhabit the land in the Monster Realm known as the Moor of Woe and Wailing. They drive and guard the Ghost Train from the Monster Fighters, who are trying to retrieve their moonstone before Lord Vampyre does. They come from dark, spooky and haunted places, and inhabit the Haunted House. They enjoy buying their shrouds at Boobash and Beyond, a fictional shop that's name is a joke on the Ghosts.

As a Minfigure (and glow in the dark form). 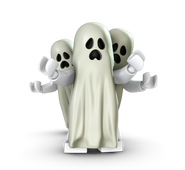 A CGI Rendering of the Ghosts

Retrieved from "https://brickipedia.fandom.com/wiki/Ghost_(Monster_Fighters)?oldid=1947640"
Community content is available under CC-BY-SA unless otherwise noted.