Ghost is a Xalax Figure from the LEGO Racers subtheme Xalax. Ghost also appeared in the video game LEGO Racers 2 as a CPU racer on the planet Xalax. 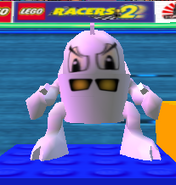 Ghost in LEGO Racers 2
Add a photo to this gallery
Retrieved from "https://brickipedia.fandom.com/wiki/Ghost_(Xalax)?oldid=617276"
Community content is available under CC-BY-SA unless otherwise noted.