The Ghost Ninja is a Ninjago Ghost Warriors minifigure minifigure released in 2015. A virtually identical minifigure appeared in multiple sets under the names Attila, Hackler, Ming, Spyder, and Yokai.

The Ghost Warrior's head is colored trans-light green with black eyes and black markings. His hood is dark blue and has a ninja mask covering his mouth, with only his eyes staying visible. His arms are dark blue. His torso has ghostly, spring green printing and purple robes with a dark blue belt. His legs are trans-light green with ripped, dark red pants just below the torso. 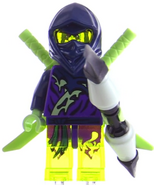