"Johnny Blaze will ride again! Later though. Gotta fill up the bike, and you do NOT wanna know where I have to go to do THAT."
―Ghost Rider in LEGO Marvel Super Heroes

Ghost Rider has a white, flaming head with a printed skull face and glowing eyes. He also has a black torso and black pants, with printing representing his leather riding suit. He has black gloves as well. As an accessory he wields a single-piece chain.

Johnny Blaze was the adoptive son of a stunt rider, but his father was dying of cancer. One night Blaze met a mysterious man named Mephisto and they set up a deal. If Mephisto spared the life of Johnny's father, Johnny would give him his spirit. Johnny's father was cured of the cancer, but died in a failed stunt. Blaze said that Mephisto didn't keep his end of the bargain, but Mephisto said he would only spare his life from the cancer and stripped Johnny of his spirit, thus turning him into a fiery ghost with a flaming skull for a head. Now whenever evil is sensed, Blaze turns into this monster, Ghost Rider, and rides and roams the streets, seeking vengeance against evil.

In LEGO Marvel Super Heroes Ghost Rider appears in Deadpool's Circus Mission. He uses his Motorcycle to ram into Nightmare periodically. He is unlocked once the mission is complete.

A promotional image of Ghost Rider 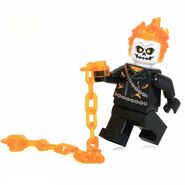