The Ghost Warrior is a Ninjago minifigure released in 2015. It was used to represent several members of the Ghost Warriors faction, under the names Cowler, Cyrus, Ghurka, and Pyrrhus.

The Ghost Warrior is built identically in virtually all set appearances, except that the version in 70731 Jay Walker One comes with a quiver and the one in 70736 Attack of the Morro Dragon comes with a backscabbard. His printed head is the same used for Attila, Hackler, Howla, Ming, Spyder, and Yokai. His torso was also used for Ghurka, and his face mask and hat are shared with Ghoultar, Pitch, and Wail. The Ghost Warrior also uses the same legs as the other Ghost Warriors with legs, with the exception of Morro, Bansha, Soul Archer, and Wrayth. 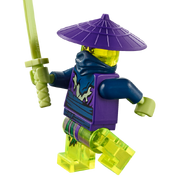