Scythe Master Ghoultar is a Ninjago minifigure released in the summer of 2015.

Ghoultar's head resembles a skull with light, pale eyes, the rest being transparent light green with a dark blue half-mask. He wears a purple straw hat as well. He also uses new ghostly black armor with dark blue robes on his torso and spring green, ghostly printing. The ghost's arms are sand blue and his hands are white. Ghoultar has a new, trans-green and dark blue ghost piece instead of normal minifigure legs.

As his title states, he uses different varations of scythes. One using a black spear with a ghost sword as a blade and a double headed scythe with black blades and a transparent green staff in it.

Ghoultar's head and torso are uniquely printed, but his ghost tail is the same piece used for Bansha, Soul Archer, and Wrayth. He shares his shoulder armor piece with Bansha and Soul Archer. His hat and face mask pieces are shared with Cowler, Cyrus, Ghurka, Pitch, Pyrrhus, and Wail.

Ghoultar is summoned by Morro using the Allied Armor of Azure to aid him in locating the Realm Crystal. In "The Temple on Haunted Hill", having determined that they need to travel to the Wailing Alps, the villains-also including Bansha and Soul Archer-travel to the Samurai X Cave to steal a vehicle. They soon corrupt the Samurai Mech into Mech-enstein, and nearly destroy Nya and Ronin before Nya taps into her power as Master of Water and drives them off. In "Peak-a-Boo", the group travels up the Wailing Alps, but are pursued by the Ninja. After a tense battle, Ghoultar is captured and held aboard the Destiny's Bounty 2.0.

In "Kingdom Come" the allies of the Ninja interrogate Ghoultar, who proves vulnerable to the allure of food from Chen's Noodles. While being watched by Ronin, he reminds the mercenary of his debt to Soul Archer. As such, Ronin drops the keys to Ghoultar's cell to enable his escape, but Ghoultar then weighs down his comrades' escape craft due to having eaten Puffy Pot Stickers. In "The Crooked Path", Ghoultar springs a trap for the Ninja after they are lured to the Caves of Despair, but is then sent back to the Cursed Realm by an Aeroblade.

In "Curseworld, Part I", Ghoultar is able to return to Ninjago after Morro secures the Realm Crystal, and takes part in the Ghost Warriors' takeover of Stiix. He joins in battling the Ninja when they arrive to try and halt the arrival of the Preeminent. In "Curseworld, Part II" the fight continues, and Ghoultar joins in preparing the Preeminent to invade the rest of Ninjago. However, and and the other ghosts later perish with their master when Nya washes her into an undersea chasm with her water powers. 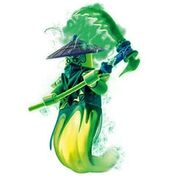 In the tv Series