Giant-Man is a Marvel Super Heroes brick-built minifigure released in March 2016. He is the enlarged variation of Ant-Man. This alias was used by Hank Pym and Scott Lang in the comics.

Giant-Man is based on his appearance in Captain America: Civil War. Unlike most minifigures, he is completely brick-built. He is also bigger to scale with an ordinary minifigure.

Giant-Man is the result of Ant-Man's use of Pym Particles to grow rather than shrink. Unlike when he is small, Giant-Man has strength proportional to his size. 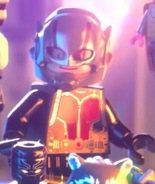