Gigabot is a minifigure from the Insectoids theme.

Gigabot wears a simple clear transparent helmet. His body colour is a mixture of bullet grey, normal grey, silver and black, and his torso is plied with small tubes and has an Insectoids insignia.

Gigabot is an Insectoid walking talking robocomputer. His head is filled with a million gigabytes of information. Gigabot is programmed to pilot every Insectoid ship, but especially likes to fly 6919 Planetary Prowler. 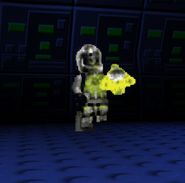 Gigabot in LEGO Racers
Add a photo to this gallery
Retrieved from "https://brickipedia.fandom.com/wiki/Gigabot?oldid=1811808"
Community content is available under CC-BY-SA unless otherwise noted.