Gil-galad is a character that appears in LEGO The Lord of the Rings: The Video Game.

Gil-galad was the last of the great Elf-kings of Middle-earth, and holder of the mightiest of the three Elven Rings. Together with Elendil, he formed the Last Alliance of Elves and Men. He was killed by Sauron on the slopes of Mount Doom in the Second Age, along with Elendil; his ring was subsequently passed to his herald Elrond.

Gil-galad with Círdan and Galadriel 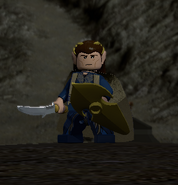