Gilderoy Lockhart is the Defence Against the Dark Arts teacher in Harry Potter's second year.

He is a celebrity, known for the books he wrote about his adventures where he defeated various monsters. However, he was revealed to be a fraud by Harry and Ron Weasley. Harry and Ron discovered the truth; that Lockhart never actually did anything that he said he did and instead took credit for the events after using memory charms on the true hero. Though Lockhart is a genuinely terrible professor, he was gifted with memory charms. In the Chamber of Secrets, he attempted to use a memory charm with Ron's malfunctioning wand on Ron and Harry. Lucky for them the charm backfired on Lockhart and he lost his memory. He became a permanent resident of St. Mungo's Hospital, where Neville Longbottom's parents were also residents. Despite the fact he was slowly recovering, the chances of full recovery are very slim. 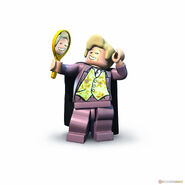 As he appears in the video game 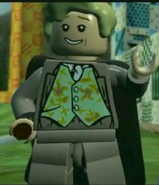 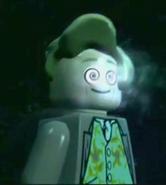 Lockhart when the memory charm backfires on him

Lockhart with Cornish pixies
Add a photo to this gallery