Ginny Weasley is a Harry Potter minifigure introduced in 2002.

Ginny Weasley is the sister of Ron. She was possessed by Tom Riddle when she opened his diary but was released from the spell when Harry Potter destroyed the Diary with a Basilisk Fang which defeated Tom. Ginny was the junior Gryffindor to fight at the Ministry of Magic along with her beloved friends Harry, Ron, Hermione, Neville and Luna. In her younger years, she used to fancy Harry but started dating other students. She also in her 5th year at Hogwarts became a chaser in the Gryffindor Quidditch team and later backup Seeker. In that same year, she realizes that Harry is also feeling something for her, and the two declare their love.

She marries Harry in the Deathly Hallows epilogue, and has three children, two boys and one girl (James, Albus, and Lily).

In LEGO Harry Potter: Years 1-4, Ginny has her latest hair-piece recoloured orange, her newest face, but with the freckles from the original, a black cape, her first variation robes recoloured dark-grey, and a brown wand.

In this game, Ginny has the latest wizard robes (Gryffindor top with black pants). She can use her pet, Arnold the Pygmy Puff.

Flesh Ginny in casual clothing on display at the 2010 Toy Fair.

Flesh Ginny in Hogwarts Robes on display at the 2010 Toy Fair. 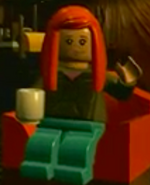 Ginny in the video game

Ginny in a trance in the Chamber of Secrets 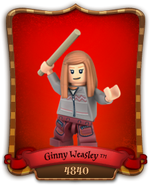 Ginny Weasley (as she appears in the LEGO Harry Potter website) 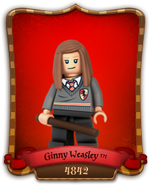 The second ginny version on lego.com (Promotion Error, Ginny appears in 4841, not 4842)