Gizmo is a LEGO Dimensions minifigure released in 2016. He is from the Gremlins theme and is one of the two characters to be released from that theme as of 2016.

Gizmo (also often referred to as "Giz" by Billy Peltzer) was an adorable, very kind Mogwai who is the pet of Billy Peltzer. He didn't seem to have a single bit of evil within him unlike some of the other Mogwais, making him an Eternal, or a Mogwai who refuses to be evil. He used to be owned by Mr. Wing until his death. Gizmo continued to live with Billy and Kate Peltzer in New York. 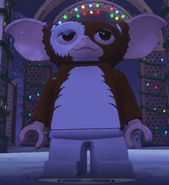 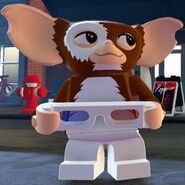 Retrieved from "https://brickipedia.fandom.com/wiki/Gizmo?oldid=1958581"
Community content is available under CC-BY-SA unless otherwise noted.