"Can’t we all just get along?"
―Gladiator

The Gladiator is a Collectable Minifigure introduced in 2011 as part of the 8805 Minifigures Series 5. He comes with a murmillo helmet, sword and shield.

The Gladiator comes with a special gold helmet used by the murmillo class of gladiator in Ancient Rome. His head has lots of dots resembling a growing beard and an angry expression as well as eyes and eyebrows. His body shows lots of muscles, and at his right shoulder is some armor. His right arm also has golden armor markings on it. At the bottom of his body is some brown leather markings with two belts with golden buckles on it. The Gladiator has a dark brown hips piece with four small golden dishes on it. At the top of his legs is some more leather markings and eight golden dishes like on his hips in four rows of twos. Below this is some yellow markings and then two dark tan boots. He has a metallic dark silver sword called a gladius and a circular shield as his accessories. 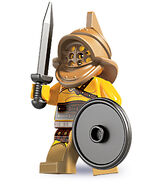 A CGI image of the Gladiator

Murmillo Helmet +
Appearances
8805 Minifigures Series 5 +
ArticleRating
2 +
Image
Col066.jpg +
InfoboxTemplate
Minifigure +
ShopDescription
The Gladiator has trained all his life wit … The Gladiator has trained all his life with his sword and shield, and there are few more skilled at battling warriors and wild beasts in the arena. He knows it is his duty to thrill the audience with an action-packed display of fighting prowess, and he has proven himself a champion over and over again.</br></br>But sometimes, deep down inside, the Gladiator wonders if there might be other kinds of entertainment out there. Something that isn’t quite so hot and tiring. Something where you never get poked with the pointy end of a trident. If only something like that existed, maybe – just maybe – he might find himself an easier line of work!might find himself an easier line of work! +
Theme
Minifigures
Series 5 +
Title
Gladiator +
Years
2011 +
Advertisement