In The Lord of the Rings books and associated literature, Glorfindel was a great Elf lord who perished in battle with a Balrog, but due to his nobility was given new life and sent back to Middle Earth. He would later take up residence in the house of Elrond in Rivendell, and helped Frodo Baggins to reach Rivendell in safety. 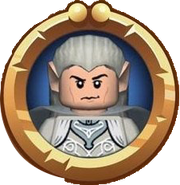 Token in the handheld release
Add a photo to this gallery