Glutinous is a Ninjago Minifigure released in 2021.

Glutinous has a unique printed torso, a black right arm with an aqua hand, and an all gold left arm. He uses the same head as the Maaray Guards, which is a reuse of the mold originally used for Char and the Pyro Whippers. This mold would be reused in 2022 for Boa Destructor, Cobra Mechanic, Python Dynamite, and Viper Flyer.

Glutinous has a set of six mechanical legs that are part of a larger build to which his torso is attached, similar to Daddy No Legs. Two different versions of this build exist, the one appearing in 71755 Temple of the Endless Sea while the other was released as a gift in the LEGO Ninjago Magazine.

In "Five Thousand Fathoms Down", Glutinous is seen in the Temple of Wojira attempting to awaken Wojira on Kalmaar's orders. His attempts to create a replacement Storm Amulet to go along with the Wave Amulet fail repeatedly, resulting in energy pulses that disrupt Nya's elemental powers and cause various forms of sea life to behave aggressively. When Kalmaar orders him to make another attempt, Glutinous protests but is bullied into complying. However, the latest attempt also fails, and the false amulet is shattered while Nya and Maya are revealed to have infiltrated the temple.

In "The Wrath of Kalmaar", Glutinous objects when Gripe orders that the Ripper Sharks be unleashed against Nya and Maya, who have escaped confinement, until Gripe points out how angry Kalmaar will be with both of them if the pair are not stopped. In "Long Live the King", he informs Kalmaar that the Hydro Bounty has become seaworthy again despite Kalmaar's previous attack on the craft. In "The Calm Before the Storm", Glutinous arrives at the Ninjago City Docks with an urgent message for the Ninja, which he delivers after being taken into custody by the Ninjago City Police. He reveals that Kalmaar successfully stole the Storm Amulet from them, and has used it to awaken Wojira before driving her out into the Endless Sea. With the knowledge that false king and monstrous serpent will soon arrive in the city, the Ninja flee to make preparations, leaving Glutinous in police custody. 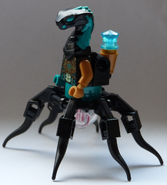 Glutinous tries to get to talk to the Ninja