This article is about The Hobbit minifigure. For the Heroica Microfigure, see Goblin King (Heroica).

"I know that sword! It is the Goblin Cleaver! Slash them! Beat them! Kill them all!"
―Goblin King in The Hobbit: An Unexpected Journey

The Goblin King, also known as the Great Goblin, is a minifigure from The Hobbit: An Unexpected Journey released in November 2012.

The Goblin King was a goblin chieftain of Goblin-town in the misty mountains in The Hobbit. He was oversized, for a goblin, and overly fat and obese. He captured Thorin and company when they sheltered in a dry cave which turned out to be a trap for travelers passing over the Misty Mountains. They were brought before the Goblin King and threatened to be tortured if they would not tell him where they were traveling. He eventually recognized Thorin Oakenshield and told him that he’d changed his mind and would give his severed head to the Pale Orc, Azog. That is when a goblin unsheathed Thorin’s sword Orcrist- which the goblins feared and called “Biter”- and sent them into a frenzy. They began to attack the dwarves when all the lights go out and Gandalf comes forward and sets the dwarves free from their captors. The Goblin King makes a later appearance when he crashes through a bridge and climbs up on it and faces Gandalf. The Goblin King laughs and taunts the old wizard, but he is interrupted when Gandalf pokes him in the eyes with his staff and slices open the creature's belly. The Goblin King falls to his knees, and Gandalf finally finishes him off by slicing open his neck. However, his victory is short lived, for the bridge Gandalf and the company of dwarves are standing on collapses and plummets down to the bottom of the cavern. When the bridge finally slows down, Gandalf and the dwarves get up and get ready to leave, but the Goblin King ultimately makes his last appearance when his corpse falls on top of the company of dwarves, slowing them down. 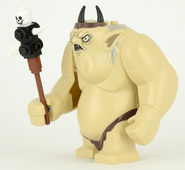 The Goblin King holding Ori by the foot 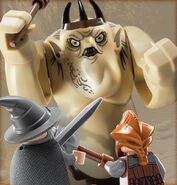 The King fighting Gandalf and Nori

CGI of the Great Goblin 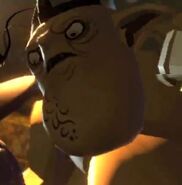 Start a Discussion Discussions about Goblin King (The Hobbit)