The Golden Dragon is a dragon creature from the theme Ninjago.

The Golden Dragon was the Elemental Dragon of the First Spinjitzu Master, embodying his unique Golden Power. It's name was also given to his unique fighting style, which only the true heir to his power could practice in his stead. This would prove to be his grandson, Lloyd, who was able to access the power of the Golden Dragon after visiting the Temple of Light with his fellow Ninja. This power allowed Lloyd to fight back against his father Lord Garmadon and the Stone Army he commanded. However, its ultimate purpose would be allowing Lloyd to triumph in his confrontation with the Overlord.

On another adventure, Lloyd summoned the Golden Dragon to help him and the Ultra Dragon in battle against a group of renegade Serpentine. He later rode it in order to travel to the Spirit Coves, where he bid farewell to the Ultra Dragon before it departed for the First Realm. Some time later, Lloyd rode the dragon and came to the aid of his friends in New Ninjago City after the Overlord returned. He would also summon it when he and his redeemed father were making their way to Hiroshi's Labyrinth. Not long after, Lloyd split his golden power amongst himself and the original four Ninja; the Golden Dragon was then replaced as his elemental dragon by the Energy Dragon.

Years later, Lloyd encountered the Golden Dragon and the First Spinjitzu Master after defeating the Oni. 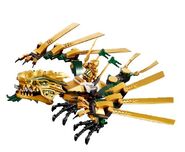