A Gonk Droid was a type of droid that supplied power to various electronic devices. The Droid made an appearance in all of the LEGO Star Wars video games released to date and is infamous for its extremely slow walking pace and near complete uselessness under normal gameplay circumstances. However, there is an extra that will make its walk extremely fast and jump higher than any normal character in the game LEGO Star Wars: The Complete Saga. The name "Gonk" refers to the droid's full name, which is "GNK Power Droid" and the noise it makes while wandering around.

The Gonk droid has a main box, supported by two short legs, and two feet. Out of the seven parts used, three are Dark Stone Grey, and four are Medium Stone Grey. The main box has Black printing. The old variant has a body made from a mailbox-type brick while the new variant is brick-built.

The Gonk Droid's official name is the GNK Power Droid, but it was nicknamed "Gonk Droid" because of the low honking noise it made, which sounded like the word "Gonk". Gonk Droids were, put simply, power generators on legs. They were programmed with very basic intelligence, so they could understand simple commands. They were often found on under-developed planets, were there was no electricity grid, or in mobile operations, such as the military.

The Gonk Droid in a lighter grey.

The Gonk Droid in the darker grey. 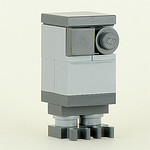 The Gonk Droid as seen in the 2012 advent calendar. 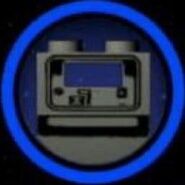