Gool, also known as Giant Scimitar Hassansin, is a Prince of Persia minifigure released in 2010. Unlike other Hassansins, Gool wears a new conical helmet piece. Gool has a giant scimitar as a weapon. He an use his scimitar to chop other swords in half.

He was killed by Seso at the battle at the temple by getting a knife thrown at his head, however, he survived when Dastan turned back time. 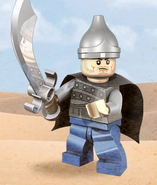