Brickipedia
Register
Don't have an account?
Sign In
Advertisement
in: Class 2 articles, Minifigures (theme), Minifigures introduced in 2011,
and 3 more
English

The Gorilla Suit Guy is a minifigure from 8803 Minifigures Series 3, that was released in 2011. He is made up of a head, torso, and legs, and includes a Gorilla Mask, banana, and display stand. He also appears in the LEGO Marvel Super Heroes TV Short with Lizard Man. It was one of five minifigures chosen for a re-release within the set 850458 VIP Top 5 Boxed Minifigures.

This minifigure represents a man in a gorilla suit. The helmet is a new mould and is printed. The head has a sweaty, uncomfortable face and has new printing. The torso is black with grey printing and the legs are black. Grey printing is also present on the back of the torso, depicting a zip. His accessory is a yellow banana. 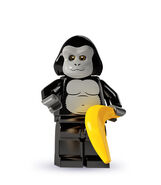 The Gorilla Suit Guy with his banana.

Front, side and back angles of the minifigure. 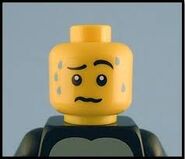 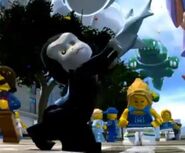 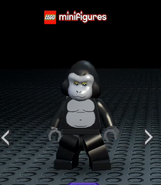 
LEGO City Undercover
LEGO Quest & Collect +
ArticleRating
2 +
Image
GSG1.jpg +
InfoboxTemplate
Minifigure +
ShopDescription
“Ook!” The Gorilla Suit Guy is a my … “Ook!”</br></br>The Gorilla Suit Guy is a mystery. Who is he? Why is he wearing that suit? Does he think he’s an actual gorilla, or did he get lost on his way to a costume party? He certainly acts like the real thing, or at least like someone who’s watched a lot of old movies and TV shows and thinks that’s how a gorilla should act. And he sure is wild about bananas.</br></br>The Gorilla Suit Guy could turn up anywhere. In the park, at the beach, hanging out in a store window or jumping up and down on a trampoline, he tends to pop up in the most surprising and unlikely of places. And while he may not be a real gorilla, somehow no one ever wants to be the one to tell him that!ever wants to be the one to tell him that! +
Theme
Minifigures
Series 3 +
Title
Gorilla Suit Guy +
Years
2011 +
Advertisement