Gorm was a character in (and the primary villain of) the television series Galidor: Defenders of the Outer Dimension, which was made into a LEGO theme in 2002. He appeared in three separate sets- therefore, Gorm may be referring to: 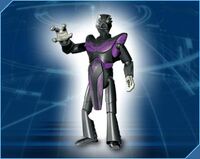 Retrieved from "https://brickipedia.fandom.com/wiki/Gorm?oldid=1280776"
Community content is available under CC-BY-SA unless otherwise noted.