Gríma Wormtongue is a minifigure from The Lord of the Rings and made a physcial apperence in 2013, in the set 10237 The Tower of Orthanc.

Gríma was the counselor of King Théoden of Rohan. He secretly joined the service of Saruman and weakened Théoden and his kingdom by working as a spy. He used his voice to keep a spell intact while Saruman possessed the king, causing the people of Rohan to call him Wormtongue.

In The Two Towers, Gandalf breaks Gríma's control of Théoden and releases the king. Before Théoden could kill Gríma, Aragorn stopped him. Instead, Gríma was exiled from Rohan with only a horse which he rode to Orthanc with.

While with Saruman, Wormtongue gave him important information, including Théoden's plans to leave Edoras for Helm's Deep and revealing the heir of Isildur. Wormtongue, shocked with surprise, watched as Isengard was attacked by Ents and flooded with water from a dam close by. After this time Gandalf, Aragorn, Legolas, Gimli, Eomer and Théoden rode to confront Saruman. When they arrived at the walls of Isengard, they found Merry and Pippin at the foot of the battle.

Grima, called "Worm" by Saruman, was shot down by many Hobbit arrows once he stabbed Saruman to death in the Shire. Grima was the last casualty in the War of the Ring. 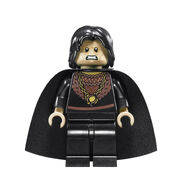 Front and back printing 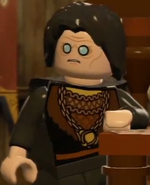 Grima in LEGO The Lord of the Rings: The Video Game 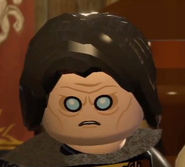 Once a man of Roh … Grima Wormtongue</br></br></br>Once a man of Rohan, Grima Wormtongue served as councellor to King Théoden. How he became a spy for Saruman is a mystery. For years he saw to it that King Théoden was slowly weakened by the evil spells of Saruman, and Rohan torn apart, so Saruman could spread his darkness and take over the kingdom. When Grima failed his mission, he fled back to Saruman as his servant, only to discover - too late - the true horrors of Sauron and his army of evilrue horrors of Sauron and his army of evil +
Theme
The Lord of The Rings +
Title
Gríma Wormtongue +
Years
2012-2013 +