The Grav Runner[1] is a robot vehicle in Exo-Force.

In 4850307 LEGO Battles, the flames and underside orb are absent. The orange bricks are recolored Bright Yellowish Green to match the Alien color scheme in Mars Mission.

The Grav Runner is manned by a Devastator robot during the Deep Jungle storyline. It can detach from the Battle Arachnoid to function as a smaller aerial attack vehicle. In its Code Brick description, the Grav Runner is referred to as a "short-range air fighter".[source?]

In 4850307 LEGO Battles, the Grav Runner is the Mounted unit in the Alien army. Despite being a vehicle, it is classified as a minifigure unit rather than a special unit, and therefore is built from Breeding Pits at the cost of 250 bricks. The Grav Runner's stats are 3/5 strength, 350 life, and 4/5 speed, making it fairly fast and battle-effective when attacking in close-range in a group. 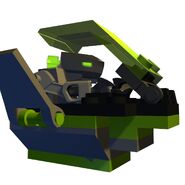