Gravis is a Ninjago minifigure who appears in Ninjago: Masters of Spinjitzu and LEGO Ninjago: Shadow of Ronin.

Gravis's head piece is a red turban with a brown symbol printed on it. His face has a long mustache with a thin beard. His torso has red, gold, and tan armor which continues to his legs.

Gravis was the descendant of the Elemental Master of Gravity. Because of this, he has inherited his ancestor’s powers and has the ability to float in midair and move other objects.

In "The Invitation", he was invited to Master Chen's Tournament of Elements. He boarded Chen's ship for and headed to Chen's island with the other Elemental Masters.

In "Only One Can Remain", he grabs a Jade Blade from Cole after Cole took it from Paleman.

Gravis is the second Elemental Master to battle the players following their arrival in the Ninjago world, following Griffin Turner and preceding Karlof. 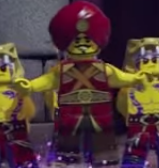