Grawp is a Harry Potter figure, who first appeared as a non-playable character in in LEGO Harry Potter: Years 5-7 and debuted as a brick-built minifigure in 2020.

Around 1931, the giantess Fridwulfa abandoned her human husband, Mr. Hagrid, and her young son, Rubeus, a Half-giant, who was smaller in stature than she would have liked. She rejoined her own kind in the mountains, and there she found a mate in an unknown giant. She later gave birth to Grawp, who despite being a full-blooded giant, was still particularly small. As such, she abandoned her second son as well.

Rubeus Hagrid, along with Madam Maxime, paid a visit to a tribe of giants in 1995, on the orders of Hogwarts School of Witchcraft and Wizardry Professor and Headmaster Albus Dumbledore, to try and bring the giants over as allies of the Order of the Phoenix in the Second Wizarding War against Lord Voldemort and his Death Eaters. Hagrid brought Grawp back to Hogwarts with him, mainly because the other giants were picking on him because of his height. Grawp kept wanting to return, but Hagrid dragged his half-brother against his will.

Hagrid kept Grawp in the Forbidden Forest for months, teaching him manners and bits of English. Grawp was rather violent over the course of the year: known at times to empty bird nests and let the eggs be destroyed, attempt to rip up the trees that he was tied to, as well as attack his brother Hagrid and attempt to grab Hermione Granger; however, in 1996, he became more docile. He later attended Dumbledore's funeral with Hagrid, where it appeared that he had at least some understanding of human emotion since he patted his half-brother's head to comfort him, though unintentionally smashing him to the ground due to his immense strength. 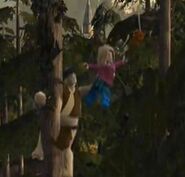