Green Army Men are Toy Story minifigures of small army men made of plastic. All of them are green to represent the plastic army men. They come with Rifles and a removable stand, based on real plastic army men (particularly the ones seen in Historical events). There is also a medic variant, which has a cross on his helmet and a medkit. Their minifigure head is part 3626bpb0403. They come with entirely green accessories, which is a new colour for the parts. One famous army man from the movies was called Sarge (voiced by the late R. Lee Ermey). He was in charge of all green army men and had green binoculars for reconnaissance missions. 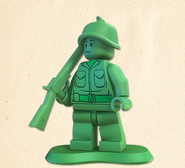 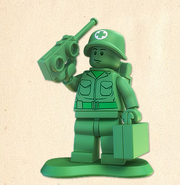 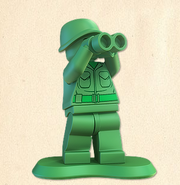 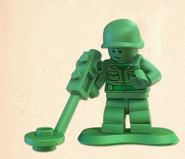